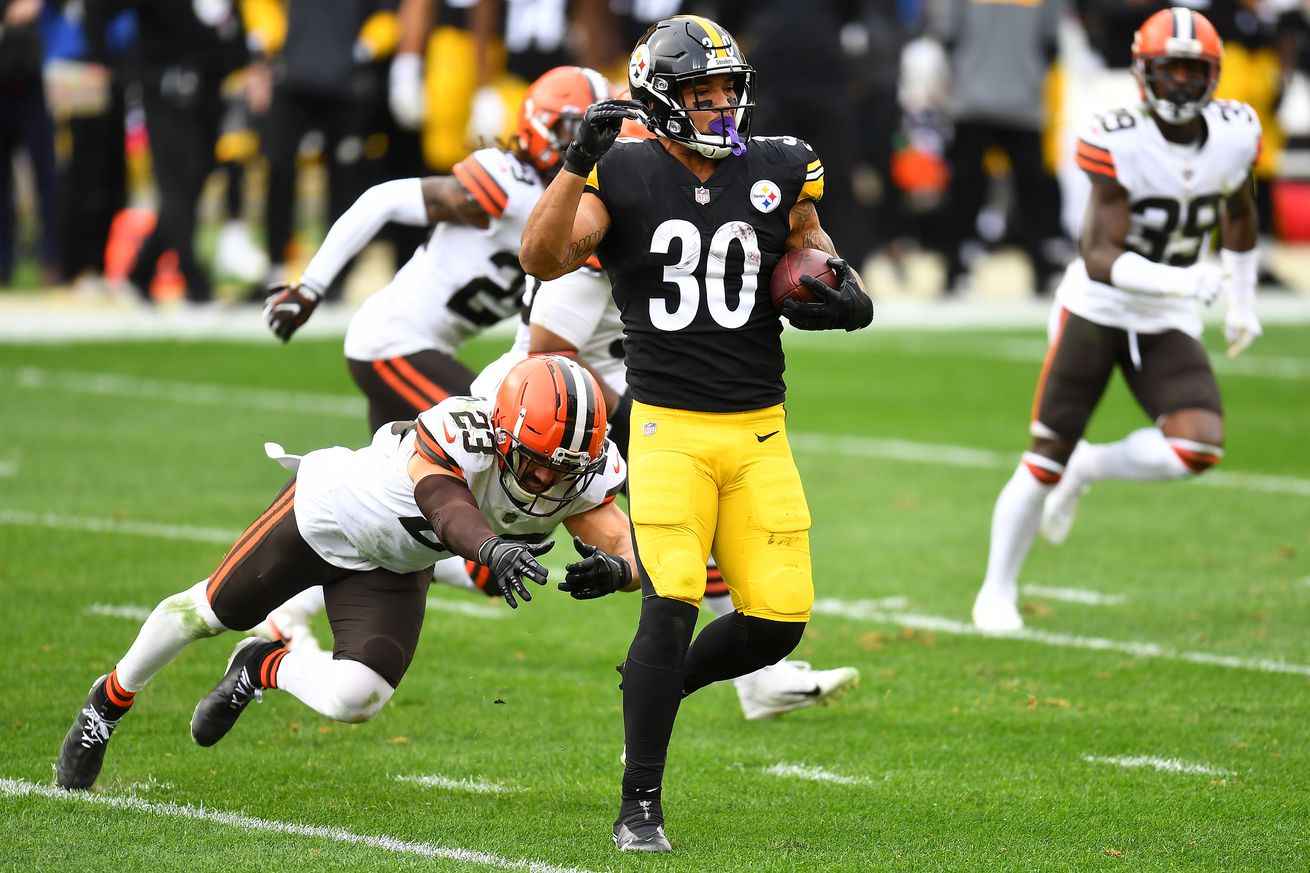 Breaking down the success and failures of Pittsburgh’s Week 6 performance.

The Pittsburgh Steelers opened up AFC North play against the Cleveland Browns Sunday. Heading into the game, many were calling the Browns the Steelers toughest opponent yet. However, the Steelers beat the barn doors off of their opponent and cruised to a 38-7 victory.

Let’s evaluate the team and highlight some individual performances. You may think my grades are spot on, you might also think I’m an idiot… Regardless, express your thoughts in the comments below.

Two weeks in a row the Steelers have put 38 points up on the board. This week they did it without a single turnover, and a 100 yard rushing attack. Anytime an offense can get its back-up quarterback into the game in a relief role, with half of the fourth quarter remaining, you know it was a great day.

James Conner was dominant. Ben Roethlisberger got better as the game went on, and the receivers caught the ball when it went their way. Great day from the offense, you couldn’t ask anymore from them.

The Steelers defense bounced back from a poor day against the Eagles. You knew it would be a great day the second Minkah Fitzpatrick took back a Baker Mayfield interception for a touchdown on the Browns opening drive. The secondary as a hole had a great game limiting Baker Mayfield and Case Keenum to 145 yards, and added a pair of picks.

The Steelers front seven had their most dominant outing, possibly ever. Their were no rushing holes for Kareem Hunt and company. They hit the quarterback seven times, and added four sacks. They finally looked like the Super Bowl caliber defense we’ve been yearning for. Stuffing the Browns on fourth and short twice was the cherry on top.

Robert Spillane looked like a fine back up after Devin Bush went down with a serious knee injury. Losing Bush for any stretch of time hurts, and it will be a position to watch moving forward.

The Steelers special teams have yet again turned in a great performance. Chris Boswell has mastered the art of the kick-off and the coverage team has consistently brought down returners well short of the 25 yard line. Boswell was also perfect kicking the ball through the uprights. Most notably being his final extra point of the game when Dustin Colquitt salvaged a dropped snap and Boswell knocked it through anyway.

Punting was fine, but watching a nicely placed punt roll into the end zone left a little meat on the bone.

Both the kick and punt return game was just ok. But, with Ray Ray McCloud fielding punts the weekly turnover has been eliminated. A step in the right direction.

The Steelers beet down the Browns. It was never close whistle to whistle, and you have to give Coach Tomlin and his staff credit. The defense was dominant, especially on third down. The offense got into the end zone again and again. And finally the special teams units stood head and shoulders above the Browns.

The coaching staff will have their hands full in the coming weeks, but this game shows the heights of which this team can climb.

Straight A’s for the Steelers this week. I can’t stress enough how great an afternoon it was for the Pittsburgh Steelers. If the Steelers had any detractors, they were silenced on Sunday. This team is for real and you can’t deny them as one of the teams to beat in the NFL.

The Offense, defense, and special teams were firing on all cylinders. If the Steelers can keep this type of effort up they will win a ton of games this year.

A perfect afternoon earns a perfect grade, and the Steelers have put some distance between themselves and the Cleveland Browns.

The Steelers now turn their attention to the 5-0 Tennessee Titans, and a three game road trip. The Titans caused the Steelers bye week to be moved much earlier into the season than it was originally set for. I expect the Steelers to be ready for this one.

Keep your eyes locked on BTSC for the latest updates, breakdowns, and previews for the Steelers Week 7 match up with the Tennessee Titans.